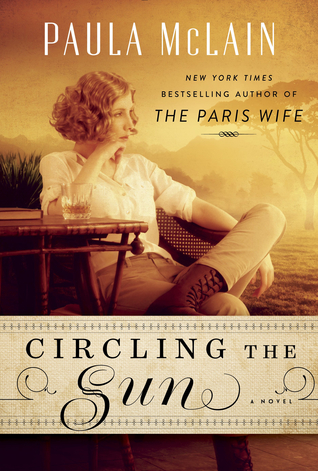 Description:
Paula McLain, author of the phenomenal New York Times bestseller The Paris Wife, takes readers into the glamorous and decadent circle of British expats living in Kenya in the 1920s. Circling the Sun tells the story of the beautiful young horse trainer, adventurer, and aviator Beryl Markham, from her childhood in British East Africa to her relationship with hunter Denys Finch Hatton and rivalry with Out of Africa author Karen Blixen—a notorious love triangle that changed the course of Beryl’s life.

The Premise:
A bio-novel following Beryl Markham from the age of four to the triumphant landing of her transatlantic flight. It begins with her mother’s abandonment of the family and traces Beryl’s struggles, adventures, and liaisons through her horse-training days, her disastrous first marriage, multiple affairs, deteriorating second marriage, and final emergence into independence.

The Good:
McLain’s writing is gorgeous. That absolutely cannot be disputed. Her description is stunning, and the amount of detail makes Africa a palpable presence in the room whenever you pick it up to breeze through a chapter. If I sound like I’m gushing, it’s because I am. She engages every sense with lyrical, rhythmic passages that truly immerse you in the place and the time. At the same time, the writing is never dense or heavy, never sounds contrived or like she’s trying too hard to be poetical. Everything flows naturally, one sweeping landscape to the next, in a way that feels more like watching the land blow past the window of your train than like merely reading about it.

The pacing is flawless, moving steadily through ups and downs without a single hiccup. It never stalls or rushes, never becomes boring. Of course, part of the interest belongs to Beryl Markham herself, who had to have done the interesting things in order for McLain to write about them.

The Bad:
I didn’t care about any of the characters, even a little bit. I was interested to find out what would happen next, but at no point did I want Beryl to succeed or to fail, or anything. I think that’s because of McLain’s rather indecisive portrayal. She seems to like Beryl and want the reader to like her, too, but largely ignores the fact that many of the real Beryl’s actions were selfish and disloyal and that people who knew her didn’t  like her. (Hemingway once called her a bitch.) These actions turn up in the novel, but they’re presented lightly, like the reader is supposed to be okay with them. If she’d been forced and victimized, I’d have been able to love her. If she’d been hard and unapologetic, I’d have been able to hate her. Either would have been better than the flimsy, waffling character who never does develop enough to know what she wants. The events are interesting, but the character is not, because she drives very little of it. Most of the story happens to her, rather than being things that she does.

In Conclusion:
I enjoyed most of the read, at least until it became predominantly about who was sleeping with whom. The setting and the story are far more full and real than the characters, though. I do not feel that Circling the Sun is an accurate representation of Beryl Markham, who was fascinating and sharp and awful.

I received a copy of this book from NetGalley in exchange for an honest review.